According to City Hall, air pollution “reduces the average Londoner’s life by around 17 months – this means up to 9,400 early deaths each year”. The government has decided to act by implementing new charges for drivers with high emission cars. The charges are only applicable to central London in this first phase. The two […]

According to City Hall, air pollution “reduces the average Londoner’s life by around 17 months – this means up to 9,400 early deaths each year”. The government has decided to act by implementing new charges for drivers with high emission cars. The charges are only applicable to central London in this first phase.

The two charges in question are the T Charge, which will eventually be replaced with the new ULEZ Charge. There is a lot of confusion for motorists because some of the criteria overlap. For example, the charging zones for the T Charge are the same as the Congestion Charge and your vehicle can be exempt from one but not the other. Here we will go through the different charges and hope to bring some clarity.

The T Charge has been in operation since 23rd of October 2017 and has been touted as a means to improve air quality. The London T-Charge is applied to vehicles that fail to meet the minimum Euro Emission standard and are entering the existing London Congestion Charge zone between 7am and 6pm, Monday to Friday.

The T Charge standard is:

There are other exemptions for vehicles and the opportunity to retrofit technology to enable your vehicle to meet the emission standards. For a full list please see T Zone Exemptions and Retrofitting for ULEZ

Vehicles failing to meet the minimum standards (as above) will have to pay a fee of £10, if entering the T Charge zone (7am-6pm Mon-Fri). Failing to pay the fee results in a £135 fine (reduced to £65 if paid within 14 days) and it’s important that drivers keep in mind that the T-Charge is in addition to the congestion charge fee. Meaning it now costs (non-residents) £21.50 to drive into central London, with a small discount available for using Auto Pay.

If you’re thinking, “how does the T Charge recognise if you have to pay?” – Tfl will simply use the same ANPR (automatic number plate recognition) cameras used for the Congestion Charge. The system automatically reads the registration plate, obtains make and model and sends the fine to anyone who has not paid the daily charge. Residents, who live in the Congestion & T Charge zone, are entitled to a 90% discount, meaning they will pay £1 (a day) for the T Charge and £1.05 (a day) for the Congestion charge.

The world’s first ultra-low emission zone (ULEZ) will come into force in London on the 8th of April 2019. Initially, it will operate within the same area as the London Congestion Charge Zone. However, from the 25th of October 2021, the ULEZ area will be expanded to include the inner London area surrounded by the Northern and South Circular roads. All cars within the expanded zone will need to meet the ULEZ emissions standards or pay a daily charge. ULEZ will replace the T Charge, but unlike the T Charge, the ULEZ Charge is active 7 days a week, 24 hours a day. This means it’s unavoidable unless your car meets minimum standards.

The ULEZ standards are as follows:

Check if your vehicle is ULEZ charge exempt using the Online ULEZ Checker.

Unfortunately for us drivers, vehicles failing to meet the standards means there is yet another fee to pay. The fee comes in at a cool £12.50 a day; now keep in mind that is on top of the Congestion Charge – £11.50 a day. You are looking at paying a new total of £24.00 a day if your car does not meet the standards (as above). That will be an increase of £2.50 compared to the T charge, a day and because the ULEZ is 24 hours, it is not something you can’t avoid. Failing to pay the fee will result in a fine of £160 (reduced to £80 if paid within 14 days) – which is hardly ideal in this current economic climate!

Like the T Charge TfL will use the same ANPR (automatic number plate recognition) cameras used for the Congestion Charge. There are certain vehicles exempt from the charge and there is a 100% for residents living in the zone, which the government has called the ‘sunset period’. The sunset period will apply from 8 April 2019 to 24 October 2021, to see a full list of exemptions please see ULEZ Charge Exemptions.

With all that information (above) in a nutshell, the ULEZ charge has a tougher criteria, no negations on timing and day and a more expensive fee and penalty charge. The table below will give you an idea: 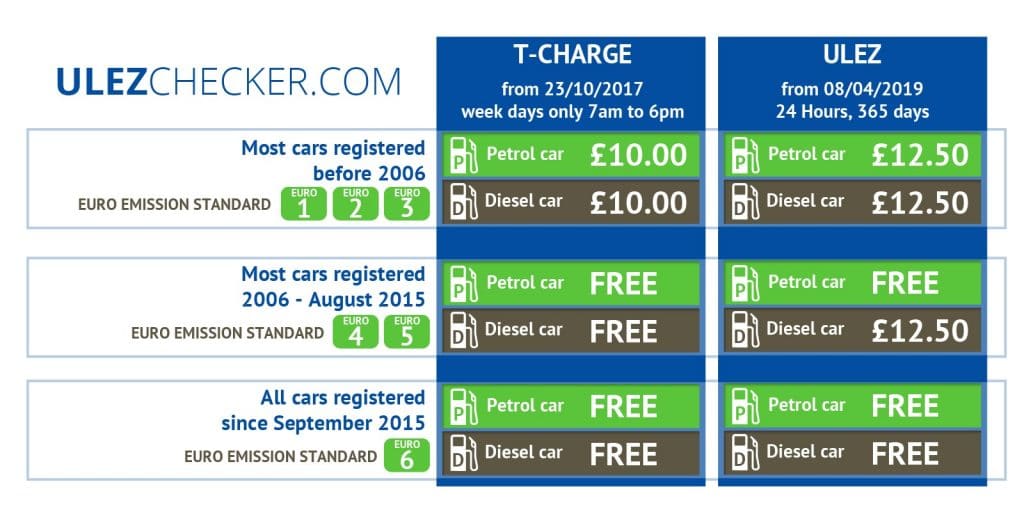 Lastly, before I leave you all I have to mention that this is likely to spread to other main cities in UK. The Sunday Times has reported that “toxin taxes” could be introduced to 35 towns and cities in England, as part of a government crackdown on vehicles that cause air pollution. Cities such as Birmingham, Leeds, Southampton, Nottingham and Derby are already planning to impose taxes on older lorries, coaches and taxis from 2019. This could be extended to diesel cars.

How to check for ULEZ Charge

What’s your part in the movement for cleaner...